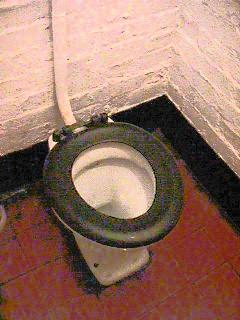 Flushing---to remove excrement and clean the lavatory---was invented at least 4,000 years ago, and well used by the Romans. However, our modern systems, and cisterns, were dreamed up about the end of the eighteenth century.

A clever version of this was sold by the JL Mott Iron Works of New York, in a copper-lined wood cistern [see diagram in book, p67]. "When seat is depressed, water passes from the left-hand compartment to the right until it is level in both; when seat is relieved, the water in the right-hand compartment descends and flushes the closet." An even more advanced version provided a preliminary wash too.

The first patent for a flush using a siphon appears to have been taken out by Joseph Adamson of Leeds, England in 1853 (No 904). This was for an automatic flushing apparatus with a pivoted cistern, balanced with a counterweight so that when it was full as required, the weight of water tipped it over, and the contents siphoned out to flush the lavatory, urinal, or sewer.

This arrangement is reminiscent of the slop-closet, but the idea of the siphon seems to have been new with Adamson; Thomas Crapper (see also Thomas Crapper---Fact and Fiction) surely didn't invent it, since in 1853 he was only seventeen years old and an apprentice in London.

George Jennings
In 1854 George Jennings, having perhaps seen the potential of Adamson's idea, took out patent No 1017, which describes beautifully the principle of the siphon. He had:

Jennings' Pedestal Vase won the Gold Medal at the Health Exhibition of 1884. In a test, a two gallon flush completely removed 10 apples averaging one-and-a-half inches diameter, one flat sponge about four-and-a-half inches diameter, three air vessels (which were like crumpled pieces of paper), plumber's smudge coated over the pan, and four pieces of paper adhering closely to the soiled surface.

funnels
According to Ms Lore Harp, President of the Aples Corporation in San Mateo, California, 90 per cent of all women do not sit on the toilet seat; they have been taught to squat over it for reasons of hygiene. So she invented 'La funelle', a disposable coated paper funnel with a 12-cm tube, that women can use to wee while standing up.

A rival company, Sani-fem, sells the Freshette---a portable female urinal---by mail order from Downey California, and claims it is great for travellers, campers, hikers, and cross-country athletes, as well as those with knee, back, or muscular problems. The regular Freshette is an 'environmentally sound, palmsized, featherlight and reusable anatomically designed funnel...' The regular tube is five-and-a-half inches long, but they can supply longer tubes for use in a wheelchair or in bed. They also sell disposable, biodegradable Freshettes.

^UP^ to Thunder, Flush and Thomas Crapper index.